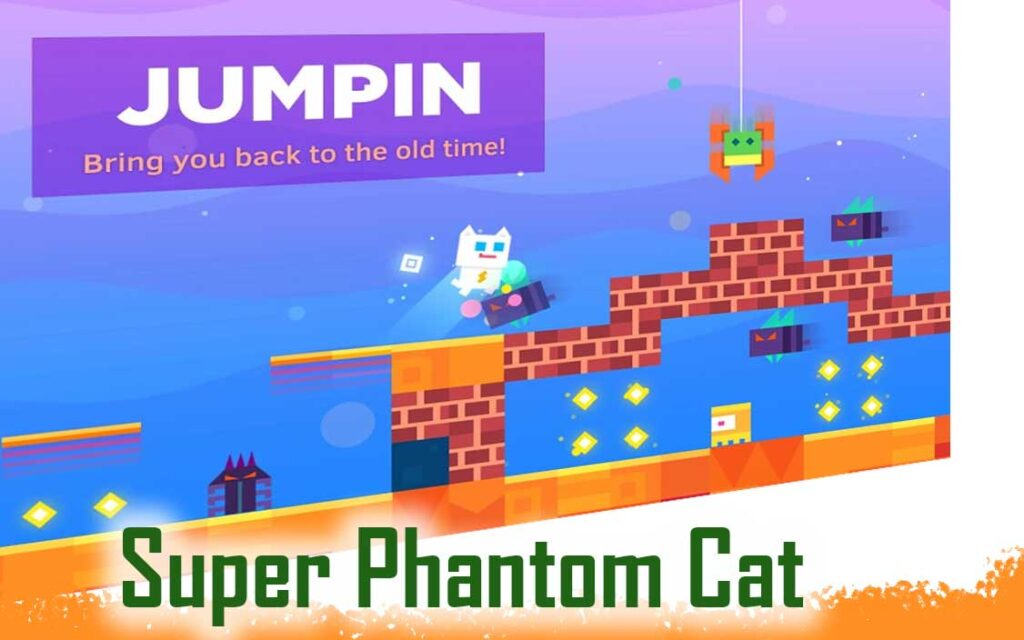 Pixel Perfect, Whimsical and colorful just the way a fun game should be like. This game is most definitely like a retake on games we used to play probably 15 to 20 years back! I can’t hold on to the memories about Super Mario because this exciting game brings in flashbacks of happy, cheerful and playful gaming days.

Super Phantom Cat is a 2D platform game designed in a retro style but also has a modern take on the Run and Jumper, Characters have been created with bright almost luminous looking color shades, electric techno background tunes and numerous hidden passages to run and pass to an increase in challenges, skills and dangers in each passing level. Amazing isn’t it? It’s the whole package of FUN inside a game with cute and colorful cats!

The main summary here is about a young cat named Ari, who mistakenly injures himself by falling into a pit thereafter he was attacked by monsters and later saved by Alpha who successfully won victory over defeating the monstrous villains. He then carried and shifted Ari to a safe zone.

Soon after Ari awakens, he attempts to follow Alpha while Alpha was trying to take a leave. To stop Ari from following him Alpha gave Ari a gadget that looks like a lightning-bolt. This gave Ari a feel of confidence and power which made Ari to settle on the idea of becoming a Super Phantom Cat!

Meow Meow Me Wow! I am honestly thrilled by it’s over all features. It’s a 4.4 star rated game on Google Play store, has over 77k reviews and 1 million downloads! There you have it on how fabulous this game can be my friends; I mean if you’re a cat lover and you are addicted to games that has cats in them. This game is just for you.it can be played on your android TV or phone without a hassle.

The characters are also created exactly to fit into the game frame so well. The ultimate goal in every level is to reach its doorway.

This game contains 96 doorways which consists of eleven worlds and five moon worlds. Other than that, there’s a battle mode sequence. cool right? Everybody regardless age who does love a good one on one battle mode has to play this. Plus, it’s all giggles and recreating memories rather than winning when it’s a game like Super Phantom Cat. The light hearted pleasure it brings is priceless.

Every particular level represents numerous symbols linked to it, and that particular symbol co relate to a different goal. There’s Star, Diamond and Moon. Each of them has a specific function.

The eleven worlds are divided into two sections in here normal worlds and specials.

The normal worlds are: –

The special worlds are: –

The Moon worlds are described as Crescent, Moonlight, Moonfall, Moonwind and Moonland.

Oh my goodness!! that’s a load of fantasy for you cool players! It’s Addictive and Purer fact!